I’ve been fascinated by the  trajectory of feminine emancipation across time periods, as depicted in fiction.

Margaret Hale, the heroine in Elizabeth Gaskell’s North and South is not a typical Victorian lady.

While men in Victorian England might not have abused women any more than present-day men do, they did not treat women as equals. English society of the period believed men and women inhabit separate spheres. Men belong to the public, aggressive, working sphere; women, the private sphere of home and feelings. Crossing spheres was particularly unkind on women.

But Margaret does just that. Subtly at first. She’s immune to the feminine trappings of finery and jewelry, goes for walks alone in the countryside (a taboo for Victorian ladies) and, unlike her cousin, does not lie prostrate on a sofa.

She blatantly crosses into the public sphere when she speaks to a group of angry workers on strike, trying to pacify them, outside the textile mills where they worked. Later, she lies to the police about being at the train station with a strange man (actually her brother but no one outside her family knows that). After these audacious acts—shameless, in the eyes of society—the owner of the mills, Mr. Thornton who has fallen in love with her, dreams of her as Una Duessa.

He dreamt of her; he dreamt she came dancing towards him with outspread arms and with a lightness and gaiety which made him loathe her even while it allured him……………when he awakened he felt hardly able to separate the Una from the Duessa;

Who is Una Duessa? They are two characters or two opposing sides of one in a famous 16th-century epic, The Faerie Queene, by Edmund Spenser. Una is Truth and Beauty and Duessa, Falsehood. Duessa takes on the form of Una to seduce Una’s lover. 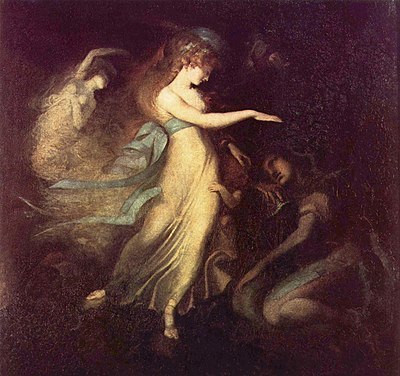 In Gaskell’s novel, Thornton dreams repeatedly of Margaret as Una Duessa, a scenario only hinted at in the 2004 BBC miniseries adapted from the novel. As in psychoanalysis, novels sometimes use dreams to reveal repressed motives and feelings. Thornton’s dreams show his ambivalence. He loves Margaret deeply, but she has violated the social code with her lie and her improper behavior at the riot.

Men may still be befuddled by women, but they now accept that everyone has good and bad sides and everyone is entitled to equal rights. Including the right to hold and speak their own mind.

Margaret. a woman of intense feelings (a feminine trait), is keenly aware of having crossed the line, and feels ashamed. So ashamed, in fact, that in the novel, she not only broods over “disgracing myself.” She faints after lying to the police,!. Her melodramatic reaction reasserts her feminine modesty, a trait precious to Victorian women and expected by men.

The miniseries, scripted with a more modern sensibility, spares us a fainting scene. I concur with this change. I believe the character, as written by Ms. Gaskell, is not the fainting kind. Ms. Gaskell, the wife of a clergyman, might have willed remorse on her heroine. I can imagine Margaret feeling guilty but also justifying lying to save her brother.

Later, after some reflection, Margaret realizes she’s attracted to Thornton. Reflecting, then admitting her desire are not exactly Victorian feminine traits,. Society of the period prefers to deny a woman’s sexuality. She’s there for procreation. And, maybe, satisfy men’s lust?

In the novel, Margaret doesn’t reveal her feelings until Mr. Thornton comes to London on business. She conjures up a way to meet him alone in a room, presumably to discuss a business proposition. But when they meet, she keeps her face downcast to hide her feelings. Mr. Thornton picks up the cues and kneels before her to “claim” her as his own.

The miniseries ends with a bolder, more assertive Margaret. She returns to Milton to seek him out, an aggressive (read “masculine”) move. Though in reality more unlikely, this ending drips with romance. We, modern viewers, applaud Margaret’s audacity. Love forgives and love wins out. A dramatic happy-ever-after even Victorians might have rejoiced in.